“Happy Friday the 13th! May Fortuna be by your side”.  – Anonymous

Why your paraskevidekatriaphobia is acting up today and what to do about it.

Triskaidekaphobia is fear or avoidance of the number 13. It is also a reason for the fear of Friday the 13th, called paraskevidekatriaphobia (from Greek.  The term was used as early as 1910 by Isador Coriat in Abnormal Psychology. According to folklore historian Donald Dossey, the unlucky nature of the number “13” originated with a Norse myth about 12 gods having a dinner party in Valhalla. The trickster god Loki, who was not invited, arrived as the 13th guest and arranged for Höðr to shoot Balder with a mistletoe-tipped arrow. Dossey: “Balder died, and the whole Earth got dark. The whole Earth mourned. It was a bad, unlucky day.” This major event in Norse mythology caused the number 13 to be considered unlucky.

“The fact is…” Mary stated further “that 13 (thirteen) is the natural number following 12 and preceding 14.” “This we know for sure”, Mary Exclaims Loudly

Strikingly folkloric aspects of the number 13 have been noted in various cultures around the world: one theory is that this is due to the cultures employing lunar-solar calendars (there are approximately 12.41 lunations per solar year, and hence 12 “true months” plus a smaller, and often portentous, thirteenth month). This can be witnessed, for example, in the “Twelve Days of Christmas” of Western European tradition.

Whether your superstition is real or not is irrelevant. Whether you will do something about your affliction is another. I come with great news for those suffering from paraskevidekatriaphobia. Information Entropy has manifested magnificent Michigan marijuana merchandise for those suffering from paraskevidekatriaphobia. Beyond the lovely staff at Information Entropy, we have an array of some of the finest cannabis products that Ann Arbor has to offer. 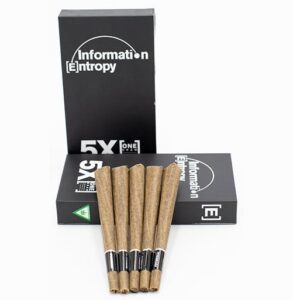 Today is Friday the 13th, and this got me thinking about the nature of the number 13 and its significance to what is commonly perceived as a negative number. Apparently, more than 10% of Americans are suffering from triskaidekaphobia but yet they still indulge in movie franchise Friday the 13th horror films that started in the 1980s. “that’s laughable” says Mary 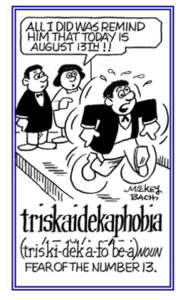 You are not alone

A 2004 National Geographic article quoted Donald Dossey, founder of the Stress Management Center and Phobia Institute in North Carolina, as saying up to 21 million people may suffer from the phobia, exhibiting symptoms that can range from mild anxiety to full-out panic attacks. June 13, 2014

The causes for paraskevidekatriaphobia may be unknown, but one thing Mary knows, and that is cannabis makes everything better! Just make sure and dose yourself gradually and with great care that your anxiety does not increase to a full-on screaming panic attack. So, smoke up ladies and gentlemen, and all of those in-between. Why? Because Mary Knows.

Check out this article on best strains to calm your Friday the 13th fears.