In the early 1980s Cookie Monster was at the top of his career. Not only was he a tremendous success on Sesame Street with fame came the money rolling in. He was so popular among housewives after starring in commercials for many popular brands, and his following was at an all-time high. However, things began to get ugly in the late 1990s. Cookie Monster’s image became less family-friendly, and he was showing signs of addictive behavior. Some say that this was due to changing public sentiment, while others claim that Cookie Monster had a drug addiction that led to his downfall. Whatever the reason, Cookie Monster has largely disappeared from the public eye in recent years.

For years, rumors have circulated that Cookie Monster had a son who was living in hiding. But no one knew for sure who the child was. Now, new evidence has emerged that reveals the truth. After years of speculation, On a recent Jerry Springer Episode “THAT’S NOT MY BABY”, Berner Cookie, Monster’s famous son has finally been reunited. 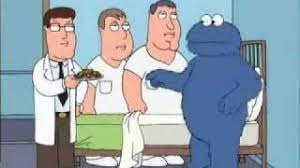 For years, Cookie Monster has been addicted to cookies. And not just any cookies, but drugs that were hidden inside cookies. It all started when he was just a young monster and his parents would give him drugs hidden in cookies to get him to do things they wanted. As he got older, he continued to rely on the cookies for energy and pleasure.

Soon, Cookie Monster’s addiction spiraled out of control and he became hooked on the drugs. He would do anything for a cookie, even if it meant committing crimes or hurting others. The other characters on Sesame Street had no idea about his dark secret, but soon enough, the truth was exposed. 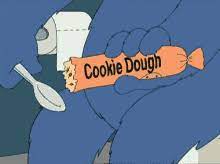 In 1982 Cookie Monster, everyone’s favorite Sesame Street character was caught in a compromising position. Polaroid photos surfaced of him strung out cookies while naked on Sesame Street.

“Oh, won’t someone tell Cookie Monster how to get, how to get off sesame street?”  – Kermit the Frog

Cookie Monster had an illegitimate son in the late 90s. in those days he was partying too much and having lots of unprotected sex. he was known for having many vices other than cookies, one of those was anonymous sex in the back of bakeries, pubs, and nightclubs. His lifestyle was insatiable in those years. he could not control his cravings for cookies and backroom anonymous sex with various partners. As a result, cookie monster’s son was born out of wedlock.

Nowadays, the Cookie Monster is a changed man. after finding out about his son, he has cleaned up his act and is now a devoted family man. However, it is clear that his past still haunts him. in the interview, he tearfully apologizes to his son for the pain and suffering that he caused him.

Fast-forward to today, Cookie Monster’s son is all grown up and has just published a tell-all book about his father called “Cookie Monster: my dad the party animal.” in it, he paints a picture of a man who was out of control and unable to care for himself or anyone else. According to his son, the cookie monster was nothing but a selfish pig who only cared about satisfying his own desires.

According to sources, Cookie Monster’s son is a 43-year-old man named Berner Cookie. Berner Cookie is a successful businessman who lives in Los Angeles. He recently revealed his identity in an interview with a popular tabloid magazine.

When asked why he decided to come forward now, Berner Cookie said: “I want people to know that I’m proud of my father and the work he does.” He added: “Cookie Monster is an amazing dad and I’m grateful for everything he’s done for me.”

Despite this revelation, some fans are still skeptical. They argue that Berner Cookie could be lying to gain attention or make money off of his famous father’s fame. Only time will tell if this story is true or not.