Detroit Herbal Center was broken into and looted by pirates late last night. Detroit police were called to the scene after the pirates crashed their dark ship into a telephone pole near the dispensary. The pirates hooted and hollered while they broke into the store and took everything they could. Neighbors were awoken by the commotion and called the police. Detroit Herbal Center is a provisioning center that provides medical marijuana to patients in Detroit, Michigan.
When the authorities were pressured by legitimate businesses to shut down havens for piracy in Detroit, it became much more difficult for pirates to ply their trade. With nowhere to sell stolen goods, pirates resorted to looting only for their valuables and plundering cargo simply for their pleasure. From the pirates’ perspective, if you couldn’t eat it, drink it, smoke it, or spend it, there was no point in stealing it. As a result, the number of pirate attacks declined sharply following the shutdown by the Piracy Operations Task Squad (POTS). 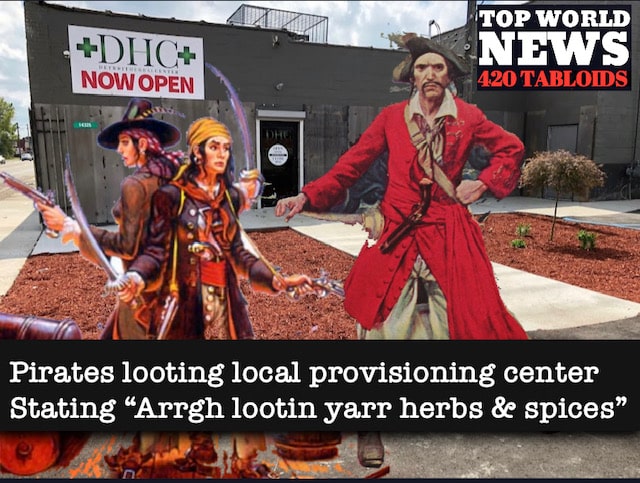 The Piracy Operations Task Squad is a special unit within the United States Coast Guard responsible for combating piracy and other illegal activities at sea. The squad’s mission is to protect American vessels and crews from attack and to prosecute those responsible for piracy and other maritime crimes. To accomplish its mission, the task squad employs a variety of methods, including patrolling shipping lanes, conducting intelligence-gathering operations, and working with other law enforcement agencies to track down and apprehend pirates and other criminals. The task squad has also been known to use force when necessary to protect American ships and crews. In recent years, the squad has been instrumental in stopping a number of pirate attacks on Lake Michigan and elsewhere.

The Manager of Detroit Herbal Center stated in a press conference “This is a lootin tootin tragedy.” Our community relies on us for yarr herbs, and now they’ll have to go without”. Arrr, We’ll do our best to rebound from this, but it’ll be a long road ahead. Garrrr”.